Dubai: Creating an open-door policy for labourers to express their needs and engaging them in activities beyond their working hours have helped a UAE-based company achieve a five-star rating in the second edition of the Taqdeer Award Programme.

In a ceremony held to award the winners of the Taqdeer (appreciation) Award, a total of 24 winning companies were honoured with trophies by Shaikh Mansour Bin Mohammad Bin Rashid Al Maktoum, Chairman of the Higher Committee for the Protection of the Rights of Persons with Disabilities.

Also recognised was 300 top-performing workers working in different companies across various sectors, including 36 workers and supervisors who received prizes.

In its second year, the award has managed to include more than one million workers from over 200 companies in different sectors, said Maj-Gen Obaid Muhair Bin Surour, chairman of Taqdeer Award and deputy director-general of the General Directorate of Residency and Foreigners Affairs (GDRFA).

He said companies were evaluated by more than 90 highly qualified assessors based on essential fundamentals such as labour policies, occupational health; cultural and work environment factors such as communication, creativity and innovation, rules and regulations; as well as results based on labour perceptions and performance indicators.

“There were big improvements in the measures taken by many of these companies in raising the living standards for the workers as a result of the award, which was launched in 2016. We recorded some new practices and examples by companies who took our feedback and evaluation reports to improve their points of weakness,” he said during the ceremony held at the Dubai World Trade Centre.

Many organisations were reported to have changed their organisational structure, upgraded their facilities, and adjusted their policies to meet the needs of the workers, he added.

He also expressed his gratitude to Shaikh Hamdan Bin Mohammad Bin Rashid Al Maktoum, Crown Prince of Dubai, for his strong support and for launching the Taqdeer Award.

“The award was launched with an aim to building fruitful and successful work partnerships between employers and employees; ensuring their respective rights; and motivating companies to strengthen the pillars of decent living for their workers, taking care of them and protecting their rights,” he said.

This year, the programme was expanded to include the construction sector, factories and free zones in Dubai, raising the number of workers targeted by the award, said Bin Surour, noting that Majid Al Futtaim Hypermarkets managed to score full marks in the evaluation.

Participating companies were given a rating by the judging committee ranging from one to five stars, based on the number of points they received in an evaluation.

“I think it was an overall achievement to do with the conditions, facilities, as well as interactions with the workers by giving them a way to express themselves.”

Last year, the company scored four stars and said they took certain feedback from the assessment team and improved upon that.

“We had some feedback on the facilities and how to engage our workers with the wider community. We organised a big sports tournament for them as part of the plan to engage them outside,” he said.

Similarly, Mohammad Faiq, human capital manager at HLG, whose company won the four stars for the second year, said they are still aiming for the five stars.

“It’s a combination of many things that helped us reach here. It has to do with the facilities, activities, welfare, and treating workers in a fair way. For the next year, will try to adjust a few issues, one of the things missing was hiring special needs workers and we will focus these small aspects,” he said.

Companies that received a five- and four-star rating will be given priority in government projects and a competitive advantage in bidding for international contracts.

The ceremony was attended by decision-makers and leaders from local and international government bodies, labour organisations and private companies. 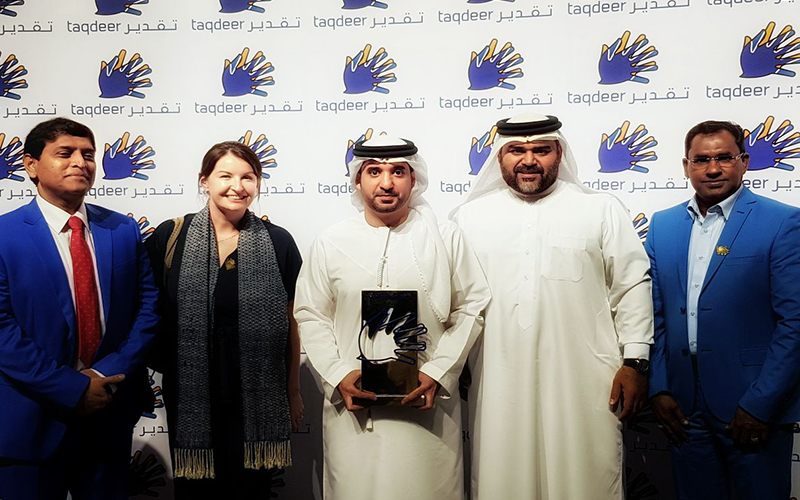