HDD and Dubai’s Next Big Project

Dubai has become home to some of the most ambitious projects in the world.

The Middle Eastern city has the world’s tallest building, the largest mall (in terms of total area), the biggest garden and an artificial archipelago that is shaped like a palm tree.

The next big thing in Dubai, United Arab Emirates, is currently under way. The Dubai Water Canal project is to include the construction of a 3-km long waterway, as well as thousands of residential and commercial units and public infrastructure along its banks.

Al Naboodah Construction Group (ANCG) was hired to divert utilities on a section of the project. The company accomplished that task with horizontal directional drilling (HDD) and microtunneling. For the HDD work, ANCG completed 24 bores, totaling approximately 7,315 m, and often worked within small footprints in areas bustling with activity.

“The project was a tight corridor with multiple crossings next to busy roads,” says Alan Welch, general manager (Civil) for ANCG. “And in two locations there was ongoing piling work for the bridges across Dubai Canal, giving us an additional challenge due to all the vibration caused by the sheet piling hammers.”

Experienced Contractor
That ANCG was selected for the project should not come as a surprise. The contractor is based in Dubai and works throughout the United Arab Emirates and the Gulf Cooperation Council (GCC). It has enough crews and equipment to operate on 10 construction sites simultaneously. The company says it is the only contractor in the United Arab Emirates to handle HDD and microtunneling in-house.

Remember that artificial archipelago? It’s called the Palm Jumeirah, and on that project ANCG bored two subsea service tunnels each 3 m in diameter and 750 m long to carry high-voltage cables.

ANCG is part of a family-run conglomerate, with more than 13,000 employees offering a wide range of civil engineering and construction capabilities.

Dubai Booming
The construction business has been good in Dubai in recent decades. The city has grown greatly physically and culturally since oil was discovered there in the 1960s. Dubai is now widely considered a global city, meaning it plays an important role in the worldwide economic system. Its population in 2015 was 2.45 million people, a 184 percent increase since the start of this century, according to the Dubai Statistics Center.

The Dubai Water Canal project could be completed as early as 2016. The actual canal is to run from a central business district to the Persian Gulf. It is to range between 80 and 120 m in width and be 6 m deep. Media reports say that, counting commercial, residential and public space, the project will cover 4.68 million sq m. It will include more than 5,300 residential units, nearly 1,000 hotel rooms, several hundred retail outlets and restaurants, 60 marinas, a three-level mall with a rooftop park, new bridges, and walking and cycling paths.

ANCG was charged with installing conduit for several different utility lines — HDPE, PE 100 and SDR 11 — in the project. It used HDD for power and telecommunication cables and irrigation lines. It used microtunneling for water mains.

ANCG had to complete 24 crossings averaging 305 m in four locations. Their work was vital for the timeline of the overall project because installations at two of the locations had to occur before bridges, which were important to relieve traffic issues, could be built.

“Bridges were planned on top of the HDD route, so it was critical those locations were completed as soon as possible,” Welch says.

Tight Spaces
Another challenge was the small footprints the crews had to work in and narrow windows downhole they had to place the utility lines.

“The utility corridor was extremely narrow,” Welch says. “At times, up to eight crossings had to be squeezed into a corridor only 5 m wide.”

The crew used an optical gyro steering tool to help achieve the accuracy they needed. In terms of the boring machine, ANCG used its Vermeer D300x500 Navigator horizontal directional drill.

“Considering the limited space available on the sites, the Vermeer D300x500 was the ideal rig for us as it is an ‘all in one’ unit, whereas other rigs of its size have separate control cabins and power packs and require large cranes to be positioned,” Welch says.

Ground conditions consisted of medium-dense to dense sand for the first 14 m that registered N-values ranging from 18 to 35 on the standard penetration test. Below that was sandstone that Welch describes as “weak.”

The HDD crew used a 21.6-cm tricone bit and a 17.1-cm mud motor on the pilot bores. The depth of each crossing was determined by how far under they needed to be at that section of the future canal, which was yet to be dug. The deepest crossing was 20.5 m below the existing ground level. The shallowest was 12 m.

For drilling fluid they used bentonite with some soda ash to increase the pH level of the makeup water. No polymers were used. ANCG used a Vermeer R300 reclaimer, a Vermeer SA400 high-pressure mud pump to deliver a consistent flow of drilling fluid and had a Vermeer SA300 mud pump as a backup. They also used three separation plants to process slurry.

“Reclaimers are used on all our HDD projects to reduce cost and environmental impact,” Welch says. “On this project, excess bentonite from one location was reused at the next location. That meant we only had to dispose of bentonite once, which was at the end of the project.”

Lots of Movement
ANCG took an innovative approach to this job by drilling all of the pilot bores at a single location first before back reaming and doing the product pullback. They had a total of 24 crossings at four locations. So, if there were six crossings at one location, the crew would drill the six pilot bores, and then pull back the product. That decision was made to limit the time, and therefore expense, that the gyro steering tool was onsite.

The pilot holes stayed open between seven and 30 days, with an average of 14 days. The drilling fluid was mixed to ensure the holes remained open for extended periods, and if any fluid loss was observed, more bentonite was sent downhole. ANCG accomplished this without any problems.

Welch says the maneuverability of the self-contained Vermeer rig proved to be a big asset. He says a trailer or rack-mounted rig usually takes a full day to move and set up, but his crews could get the D300x500 set up within one hour.

“The total project took us 170 days,” he says. “We had to move the rig 48 times — once for each of the pilot bores and then again for the product pullback — so if we had used another rig it would have taken us at least 48 more days to complete the project.”

That helped ANCG play its part in the construction of what will soon be another iconic project for Dubai. 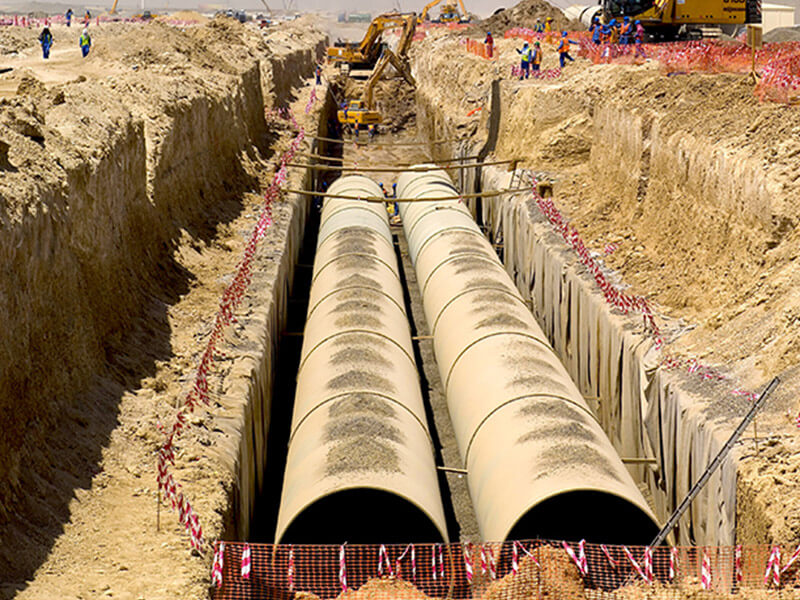