‘Made in the UAE’ buses gear up for more export markets

Dubai: The UAE’s aspirations in automotive production get a lift with Ashok Leyland to raise production to 5,000 buses a year at its Ras Al Khaimah plant next year. This year, the Indian brand — the fourth largest bus manufacturer in the world — expects to touch the 4,000 unit mark. It was in 2010 that the Ras Al Khaimah facility was commissioned, as principally an assembling base in the initial stages. The manufacturer — part of the highly diversified Hinduja Group — is already touching the 20 vehicles a day mark at the local facility. In the coming months, it will introduce production of higher end models, such as the Optare (of UK origin) and the Partner, for which it has a licensing arrangement from Nissan.

“Currently, 40 per cent of our UAE production output is localised — but when it comes to the body parts, that touches 80 per cent,” said Vinod Dasri, CEO and Managing Director at Ashok Leyland. “That will follow the introduction of our Oyster series, with much of the production design being done here.

“We are moving away from just assembling the vehicles at Ras Al Khaimah, which is now one of our key production bases in the world.”

And the manufacturer is pumping in more resources into the UAE. It was late last year that the base for all of the international operations was moved to Dubai. “Demand in our home market of India had slowed down in the last four to five years and that meant it was even more important to get more out of our international operations,” said Dasri.

In this regard, the Ras Al Khaimah plant will play a key part. As of now, nearly 50 per cent of its output is headed for export markets, including as far afield as Peru and Chile. Kits have also been shipped out to Russia and Ukraine, while the other Gulf markets and parts of Africa are also importing.

Is any of the production heading for Iran? “Not right now … because our shareholder is based in the UK,” said Dasri. “But we are hopeful that eventually we will ship to Iran once the sanctions are overturned. And that should be near enough.”

But it’s in the UAE that Ashok Leyland wants to get more — “Our base models (popular as school buses) have a 70 per cent share,” the CEO added. “But that’s addressing only the 2,000 units a year out of the 20,000 buses (across all categories) a year the UAE accounts for.

“With our new production and the ones coming soon, we will be in a position to address 60 per cent of the overall market. The Oyster series is thus crucial because it is the first in the Gulf that is rollover and front crash compliant. We are hopeful that regulations will come in soon requiring schools to offer the highest safety on school trips.” (The prices start at $40,000. On Sunday, its local partner, Al Naboodah Group Enterprises opened a 15,000 square metre facility in Dubai, to showcase and offer after-sales support.) In recent years, the Hinduja Group has been expanding its interests in the UAE, using it as a key overseas hub for its network of interests straddling geographies. There are plans to do more with the Ashok Leyland label. “Some talks have started on vehicle financing, which is something we offer in India,” said Dasri. “At this stage, it is premature to talk about whether it would come under our label or some other Group interest if financing is introduced in the UAE.” 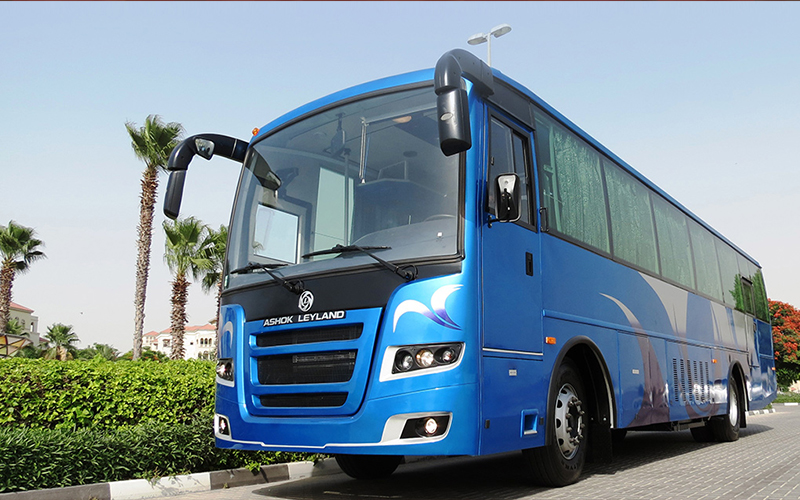